Ask about this product

More information about the H100 series

Ultimately, the H100 series is the successor of the very popular IP5A series, throughout the power section. The image below illustrates the difference in the size of both series. Clearly, the H100 has been slimmed down quite a bit (on average 34% smaller, considering the dimensions and weight).

Substantial size reduction allows you to save space in the control cabinet, and thus minimize installation costs and related work. Another advantage is the installation of devices “side by side” with a minimum gap of only 2 mm between them. For comparison, the IP5A series required a minimum gap of 50 mm. It should also be noted that in such a small enclosure both C3 EMC filter , which is the standard for 0.75 KW – 30KW, and DC reactor, which positively affects the power factor and THDI, for 37KW – 90KW power range.
The H100 inverter is only available in a three-phase version
for 3x230VAC and 3x400VAC voltages and IP20 protection. The power ranges are from 0.75KW to 90KW. This series will be extended by units up to 500KW. By definition, the inverter is dedicated to HVAC applications, therefore the standard unit overload is 120% of the rated current for 60 seconds. The user has control with any U / f curve, with or without slip compensation, and with appropriate settings, the H100 can also be used as a drive for heavy applications with constant torque control (full motor autotuning required and selection of the appropriate macro). It is also possible to control PMSM motors or work with induction motors, asynchronous up to 1000 Hz
(required setting of the appropriate inverter type).
As in the S100 series, the H100 has many technical innovations
and new products that are missing in previous LSIS series. Modern components, new data architecture, USB interface for communication with a PC, a new cooling system, the possibility of installing a heat sink outside the control cabinet and many, many more. The standard input / output strip is as follows:

Pulse input up to 32KHz.

Pulse output up to 32KHz. 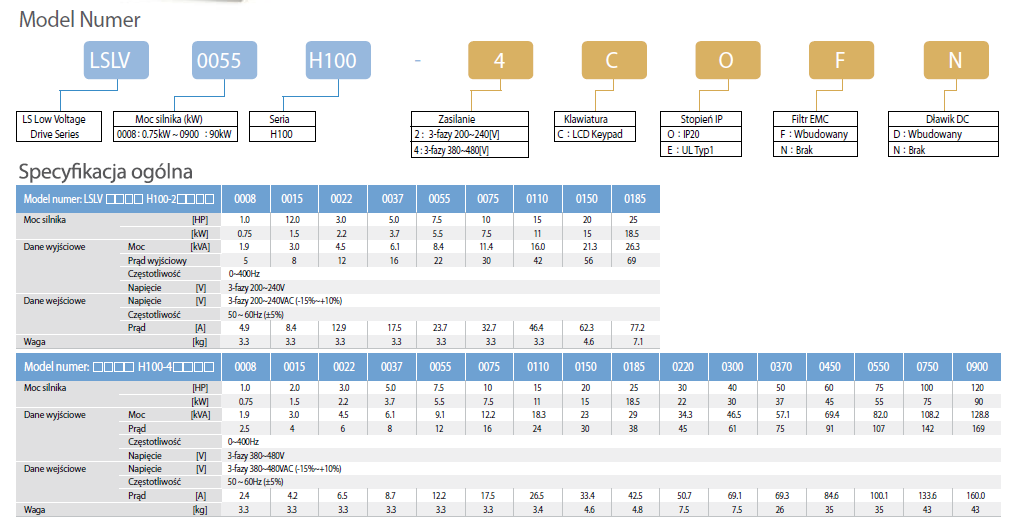 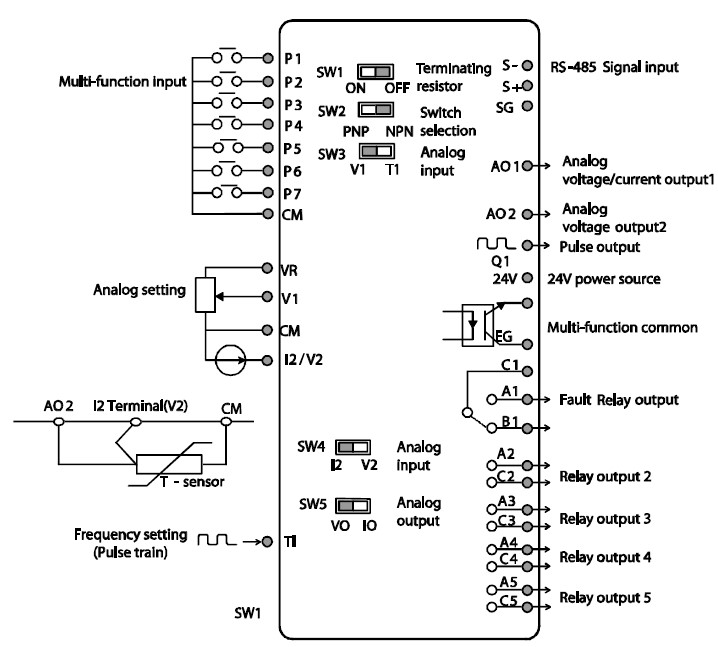 A multitude of various inputs / outputs, a built-in EMC filter, a small overall size and built-in BacNet communication make the inverter an ideal solution also for the BMS industry. Definitely H100 is a very powerful tool that can handle any water and wastewater application as well as BMS.
A special advantage, from the operators point of view is a keyboard specially designed for their needs. The appearance of the keyboard itself, its shape, and the way it can be manipulated may resemble the IS7 series panel, however, at the bottom there are three buttons dedicated to the HVAC industry: Auto, Hand, Off. By means of only these three buttons, it is possible to change the local / remote control, activate the set auto mode or trigger the user function (defined button action).

In addition, the inverter offer a lot of functions dedicated to water and sewage applications:

Fire mode function: after receiving a signal from the fire protection sensor, the drive commences operation and ignores most errors until the fire alarm signal is removed or inverted becomes damaged.

Underload / dry running function of the pump (the user declares his own load curve, which acts as a reference curve for the current load).

7 dedicated macros: fan, exhaust fan, circulating pump, pump, cooling tower, compressor, constant torque. By using only one parameter from the macro group, the operator is able to prepare the drive for work with the given application / load.

Flow compensation: the flow compensation function is useful when the pump is pumping the liquid into very long pipes arranged horizontally. At very long distances there are significant pressure losses, which can be compensated using these functions.

Soft filling: A function that protects the pump against water hammering, pressure increase and hydraulic impacts. The function allows for gentle and smooth filling of pipes.

Dedicated ramps for pumps: this function eliminates water hammer during pump stop or when closing the valve. The function modifies the ramp
to protect the drive bearings.
w celu ochrony łożysk napędu.

Level detection: depending on the source of the level signal, the inverter allows to indicate if the level has been exceeded or not reached (using
relay output).

Lubrication check: after receiving the start signal, the relay output is opened for lubrication. After completing the lubrication, the inverter starts running automatically.

Throttle control: in fan applications, it is possible to control the damper from the level of the H100 inverter.

Pump cleaning function: performs the acceleration and deceleration operation several times with the change of direction. This allows effective removal of pump impurities.

Initial preheating of the engine.

Purpose:
The new range of H100 inverters combines most of the functions for HVAC and BMS applications with modern architecture and a modern look. Indisputably this is the best alternative for many converter models found on the market.