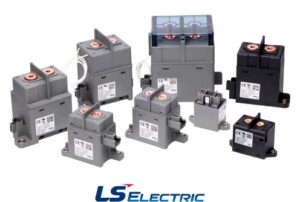 LS develops the mass production of its series: GPR-M (DC 1000 V class) and GPR-H (DC 1500 V class). Generally, the higher the rated voltage, the bigger the size of a product, to ensure proper insulation. However, the GPR-M (1000 V) series is produced in the same size like GER (DC 450 V) series, improving the use of space by the customers. GPR-M and GPR-H series are equipped with the same hydrogen barrier, just like the GER series.
GPR-H series is characterised by rated voltage of DC 1500 V, 500 A, and is equipped with an auxiliary contact. This series has UL and IEC certificates. Another advantage of the GPR-H series is possibility of using in a system where two-way blocking may take place, for example: back blocking or loading / unloading of the system, thanks to the application of a two-way magnetic structure for arc extinguishing.

These relays can be also used in photovoltaics, where the HVDC relay switches the solar modules on / off in PV systems.

contains a permanent magnet and hydrogen for optimum arc extinguishing